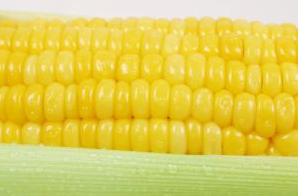 Home » Freezer Recipes » Vegetarian » How to Freeze Corn on the Cob

Is corn on the cob one of the few vegetables your kids will actually eat? But of course it isn’t nearly as good – or as fun to eat – when it comes out of a bag in the freezer or out of a can. But did you know that you can actually freeze corn on the cob while it is still attached to the cob? And it is quite inexpensive to buy plenty of ears of corn when it is in season, meaning you can enjoy corn on the cob in the middle of winter without paying an arm and a leg for it.

Try and pick ears of corn that are all similar in size. If size varies quite a bit, you will need to do them in batches. First, remove husk and silk from the corn. Break off the stem, and cut off the top end where there is no corn, if needed.

Now, you need to blanche the corn. Divide the corn into piles – small, medium and large – if you were not able to get them all the same size.

Now, blanche them in boiling water based on the following:

Now, immediately remove from the boiling water and submerge them in cold water, to stop the cooking process. Once completely cooled, drain the corn and immediately freeze in freezer ziplocs or containers.

On cooking day: Remove corn early in the morning or the night before, so it has time to completely thaw. Boil corn in boiling water (just enough water for the corn to be submerged) for a few minutes until heated through, drain, butter and salt if desired, and serve.